Brian Schuman of the US Hickory Players Club has just received a new shipment of his CLASSIC golf ball and he’s making them available for sale.  They are now available in two finishes – white and a vintage-style off white. 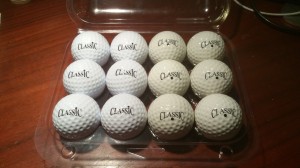 The CLASSIC is a small dimple ball that uses the ATTI dimple pattern, which was originally produced between 1908 through the 1960s. Designed for superior hickory play, the ball is manufactured with modern methods so it is seamless, and it feels similar to the Callaway Supersoft Chrome or Supersoft.

Jeremy Moe, winner of numerous hickory titles including the US Hickory Open and World Hickory Match Play Championship, recently declared the CLASSIC to be “my ball of choice for hickory play.” The CLASSIC has also been approved for play with the Metropolitan Hickory Society, the Florida Hickory Golfers, and the PHGA Tartan Tour, as well as at the World Hickory Match Play Championship. Many other regional and national groups are checking it out.

Pricing for the ball is shown below.  if you’re interested in ordering, contact Brian Schuman directly via email at brianschuman@gmail.com.

UPDATE:  I asked Brian for some more historical info on the new CLASSIC ball and he sent this:

In 1908, an Englishman, William Taylor, received a patent for a golf ball with indentations (dimples) that flew better and more accurately than golf balls with brambles. A.G. Spalding & Bros., purchased the U.S. rights to the patent and introduced the GLORY ball featuring the TAYLOR dimples. Until the 1970’s the GLORY ball and most other golf balls with dimples, including the famous Spalding DOT, had 336 dimples of the same size using the same ATTI pattern. The ATTI pattern was an octahedron pattern, split into eight concentric straight line rows, which was named for the main producer of molds for golf balls.

In 2013, the U.S. Hickory Players Club received the rights to the original ATTI molds to produce a modern golf ball exclusively designed and built for modern hickory golf play. Manufactured with current technology, using the very latest in research and development, the All-New ‘Classic’ from ModernHickoryGolf.com (site under construction) is the first and only golf ball ‘specifically designed for modern hickory golf play’. This two piece, soft-surlyn polymer covered ball produced by the injection molding process, the ‘Classic’ is the softest feeling, longest flying, and lowest compression golf ball available to hickory golfers in the world today.

Check out the schedule of Hickory Events the FHG will be playing with the Florida State Golf Association!